Coming up to Easter P5 are continuing to work very hard!  We have already completed some excellent tasks this year, but we are striving to finish off some major pieces of work, including a Powerpoint presentation on a chosen Egyptian God, a creative gymnastics routine developed by each child and a written newspaper report on the death of Tutunkhamun and the mystery surrounding this.

For the Powerpoint, each child was encouraged to select an Egyptian God, which they found interesting.  Next they researched this god online on a specific website, before learning the ins and outs of the Powerpoint software and developing a colourful, engaging presentation to teach the remainder of the class about their god.

Over the last term P5 have thoroughly enjoyed learning the basics of gymnastics in a safe environment.  Each child was carefully assessed in order to let them progress to the more complicated movements such as handstands and cartwheels, which they could include if able to perform lead-ups and movement succesfully under supervision.  Subsequently, each child was tasked with the creative building of their own routine including; balances, jumps and different methods of travelling.  The children continued to practise until the final week of term in which they performed their routine in front of their peers and a video camera.  A great success!!!  We will reveiw the videos in class after Easter to gain feedback and learn from a very worthwhile activity.

Finally, the task of our last creative writing piece of this term entailed becoming an Egyptian reporter back in 1327 B.C., at the death of 'the boy king' Tutankhamun.  Having completed a large amount of research in this area online, each child had to imagine that they were back in this time and produce a report the day after Tutunkhamun's death, including all of the major details and facts in addition to some suspects that may have been involved in his demise.  Everybody loved completing this activity and produced some wonderfully creative responses even adding interviews from witnesses.

This term for P5, has been an exceptionally busy one.  Work in class, revision, exams and sports day have all been completed with a great attitude and a desire to do as well as possible.

Our topic this term involved the study of Myths and Legends.  We listened to ancient stories from around the world, in particular Ancient Greece.  We learned of the story of Perseus and Medusa, flew with Icarus towards the sun and defeated the dreaded Minotaur in the Labyrinths of Minos.  We also learned of stories closer to home, such as Finn Maccool and the Giant's Causeway.  Several fantastic pieces of writing were completed in class.  One example involved the pupils creating a myth of their own and accompanying this with some excellent art work.  This was then formed into a book using the Book Creator application on the school Ipads.  Music and dramatic voices were added for greater effect.  Each child thoroughly enjoyed creating their own book and gained many skills during its evolution.

Recently, we have been involved in a scheme associated with the Belfast Food Network.  This entailed the design of a plot to grow fruits and vegetables in the nearby Mountvernon Community Gardens.  The first session was based in class and the children were encouraged to pick which fruits and vegetables they would like to grow and complete a layout for their planting bed.  The second session took place in the community gardens.  It proved to be a very enjoyable morning and the children learned a lot.  Each child was able to plant a variety of foods, such as; onions, carrots, peas, rhubarb and strawberries, to mention only a few.  Please view the photos below. 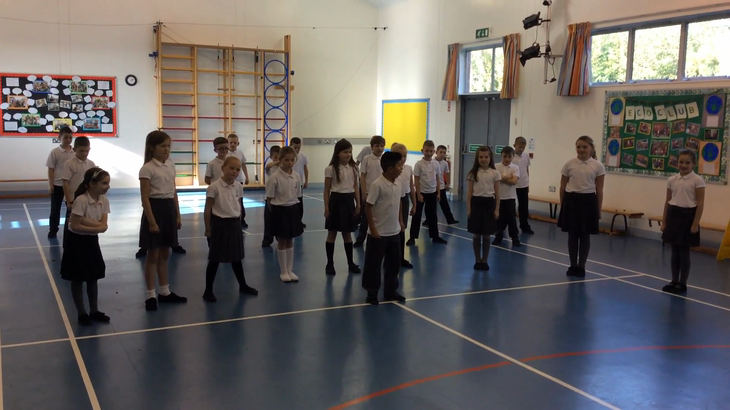 As the Rugby World Cup 2015 was coming to a close, P5 learned the movements and lyrics of the New Zealand Haka
Top

Unfortunately not the ones with chocolate chips.

Some cookies are necessary in order to make this website function correctly. These are set by default and whilst you can block or delete them by changing your browser settings, some functionality such as being able to log in to the website will not work if you do this. The necessary cookies set on this website are as follows:

Cookies that are not necessary to make the website work, but which enable additional functionality, can also be set. By default these cookies are disabled, but you can choose to enable them below: